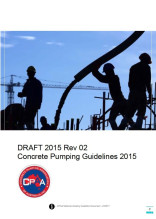 Project stages: Take responsibility for the industry leadership where none currently exists,  through the cooperative development of these guidelines we can provide clear and unambiguous guidance on industry expectations.  Working Group has been formed.  Tasks and (status);

The current standard recommends that pumpers use a logbook for daily and monthly record keeping and safety purposes. The annual inspections, which are to be conducted by a certified inspector, will refer to the logbooks as a part of their inspection to determine if the pump requires any parts changed or repaired.  AS2550.15 also highlights that on the 6 year anniversary of the pump’s purchase date it is to undergo a major inspection.

One of the many changes to AS2550.15 that is currently under review is the Major inspection instrument. The sub-committee proposed that the Major inspections should be based on the cubic meters of concrete that the equipment has pumped. Another proposal is that after 6 years the pump does not have to be stripped, but must be inspected by a competent person to determine if the pump needs to be stripped. This process is continued annually until the tenth year when the pump must then undergo major inspection.

The Concrete Pumping Association of Australia is a member of Technical Committee ME005 and ME091 responsible for AS 2550.15 Cranes - Safe Use Part 15: Concrete Placing Equipment and referenced documents.

The Standards listed below covers specific requirements for the safe use of concrete placing equipment and is intended for use in conjunction with AS 2550.1 Cranes - Safe Use Part 1: General requirements.